"Squad, tighten up. Form on me."
–Anakin Skywalker, Star Wars: The Clone Wars

The Clone Wars are raging across the Star Wars galaxy and, as more and more planets are drawn into this epic conflict, both sides explore different ways to support their troops on the ground. Soon, both the Galactic Republic and the Separatist Alliance will have the chance to supplement their forces with some of the Clone Wars’ most cutting-edge military technology. Fantasy Flight Games is happy to announce two new Unit Expansions for Star Wars™: Legion:

Representing radically different approaches to vehicular combat, these Unit Expansions can support your troops in every phase of the battle. Whether you’re looking to lay down some heavy fire to protect your troops’ advance or make your army more mobile, these units open new options for your Clone Wars-era armies, letting you diversify your forces and explore new strategies, no matter what enemy you face. 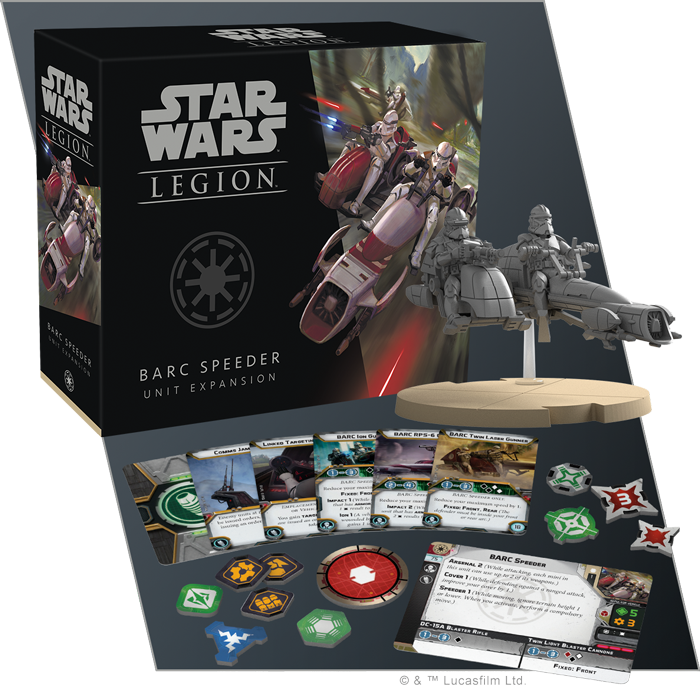 Versatile and swift, BARC speeders are designed to assist clone troopers as they scout the field, protect key targets, and launch rapid surprise attacks. These durable speeder bikes are armed with heavy blasters and fitted with powerful engines, making them useful in nearly any theater of ground war across the galaxy.

Although they may be defined by their great speed, BARC speeders provide the Grand Army of the Republic with much more than a target that's hard to hit. An optional sidecar leaves room for you to equip your BARC speeder with a range of weaponry, instantly turning it into a heavy weapons platform. When combined with the speeder’s built-in Twin Light Blaster Canons, driver and passenger can unleash an attack powerful enough to damage the heaviest Separatist droids.

Within the BARC Speeder Unit Expansion, you’ll find one unpainted, finely sculpted BARC speeder miniature different than the miniature included in the Star Wars: Legion Clone Wars Core Set—now featuring pilots in BARC Speeder Pilot armor. If you choose, this miniature can include a sidecar featuring a built-in M-45 Ion Blaster or a Mark II Medium Blaster. Similarly, a Clone Trooper can fire an RPS-6 rocket launcher from the sidecar. This expansion also includes a unit card and an assortment of six upgrade cards, inviting you to outfit your speeder to fit your personal battle plan.

As the Republic’s valiant clones and the Separatist’s dauntless droids battle for supremacy across the galaxy, the vehicles that enter the fight to support these troops could make all the difference. Make your plans, bolster your armies, and claim victory in the Clone Wars!