That the influence of the old house was unwholesome, he could not deny; but traces of his early morbid interest still held him there. He argued that the fever alone was responsible for his nightly phantasies, and that when the touch abated he would be free from the monstrous visions.
–H.P. Lovecraft, “The Dreams in the Witch House”

Your lead regarding the Silver Twilight Lodge’s charity gala has left you with more questions than answers, and the events that followed have made you question your own sanity. First, there was the cryptic tarot reading from a mysterious soothsayer, then the disappearances, and what you saw in the woods… it’s not possible.

To make matters worse, you seem to have drawn the attention of the Silver Twilight Lodge. They are as eager as you to have your team of investigators look into the disappearances, but what are their true motives? How close can you get before becoming tangled in their web? The only way to find out is to move forward, but to do so you must peer into Arkham’s past.

Fantasy Flight Games is proud to announce The Secret Name, the first Mythos Pack in The Circle Undone cycle for Arkham Horror: The Card Game—now available for pre-order at your local retailer or online through our website!

Look for answers within and not without. Many paths lead to the same answer. Contemplate the greater truth.

Following the events of The Circle Undone, you are desperate to find more information about the dangerous new coven of witches that has taken up residence in Arkham. Such knowledge is difficult to come by, even in a place like Arkham, but you do know of one witch whose story has been passed down for nearly two hundred years: Keziah, who escaped from the Salem Gaol in the late 1600s, and whose ghost still supposedly haunts the condemned Witch House in French Hill. 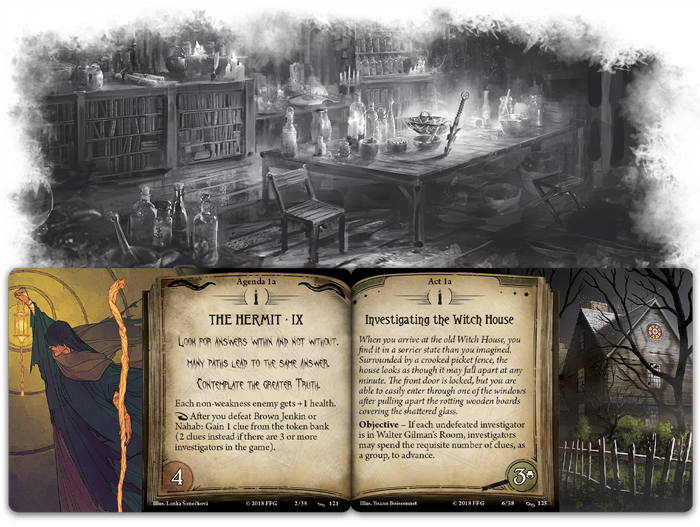 When you arrive at the old Witch House, you find it in a sorrier state than you could have ever imagined. Surrounded by a crooked picket fence, the building looks as though it may fall apart at any minute. The fact that it has managed to stand for more than two hundred years is astonishing, but from what you see, it’s as if some dark will is the only thing that keeps it from crumbling into the Earth. The front door is locked, but you easily enter through one of the windows by pulling down the rotten wooden boards that cover the shattered glass. But breaking in may only be the beginning of your troubles…

A Dream in the Witch House

As a new cycle begins, you will need new tools to battle unholy forces far more powerful than yourself. You will have to stretch your mind beyond what you had previously thought possible and learn from your allies to become stronger, faster, and smarter than your enemy. To help you with this task, you'll find a brand-new type of player card in The Secret Name—cards that break boundaries and belong to more than one class. These cards, identified by their golden hue and dual class icons, can be added to your deck if you have access to either of the classes detailed on the card. For example, Scroll of Secrets (The Secret Name, 116) is both a level zero Seeker card and a level zero Mystic card, meaning that an investigator like Diana Stanley (The Circle Undone, 4) can add it to her deck even though she does not have access to other Seeker cards. 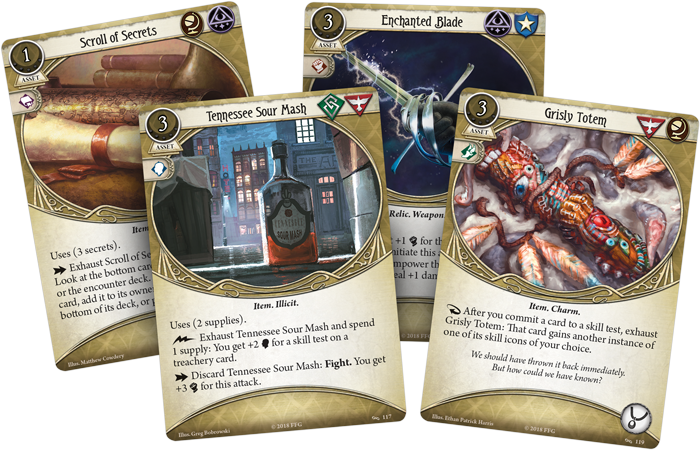 If, however, an investigator has limited access to one of the classes on a multiclass card, that card occupies one of the investigator’s limited slots! For example, let’s say that "Ashcan" Pete (The Dunwich Legacy, 5) wants to add someTennessee Sour Mash (The Secret Name, 117) to his deck. While the drifter has unlimited access to survivor cards, he can only have up to five level zero cards from any other class. Tennessee Sour Mash is both a survivor and a rogue card, and therefore it fills one of his five other-class slots. But with these multi-class cards’ diverse uses, like increasing your willpower with a swig before smashing the bottle over an enemy’s head, they are well worth including in any investigator’s arsenal.

Can Arkham’s history give the answers you need to safeguard the city’s future? Is Keziah somehow related to the coven that has sprung up more than two centuries later? Enter the Witch House and discover the secrets hidden within its walls!