It was a colossal and nameless blasphemy with glaring red eyes, and it held in bony claws a thing that had been a man, gnawing at the head as a child nibbles at a stick of candy. Its position was a kind of crouch, and as one looked one felt that at any moment it might drop its present prey and seek a juicier morsel.
–H. P. Lovecraft, “Pickman’s Model”

Your adventures in The Dream-Eaters cycle have torn your team asunder and left you to face deadly spiders that infect the world of the waking while your allies remain trapped in a wakeless slumber, unaware of the danger that they—and the rest of the world—are in. You forced your way into the Dreamlands as an act of desperation, but what you have found there is not what you expected…

Fantasy Flight Games is proud to announce Point of No Return, the fourth Mythos Pack in the Dream-Eaters cycle for Arkham Horror: The Card Game—now available for pre-order at your local retailer or online through our website with free shipping within the continental United States! 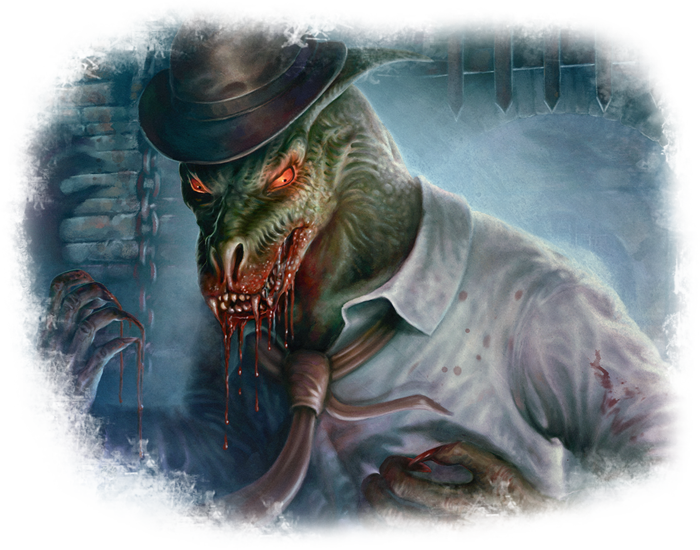 Point of No Return is Scenario 3–B of “The Web of Dreams” campaign, which follows the path of the investigators left behind to handle the horrors of the waking world in The Dream-Eaters. This scenario can be played on its own in Standalone Mode or combined with the other expansions in The Dream-Eaters cycle to form a larger four-part or eight-part campaign.

Following the events of A Thousand Shapes of Horror, you have finally reached the Dreamlands, but it is not as you expected. No wondrous lands or fabulous cities greet you; merely the dark, barren realm of the Underworld. Perhaps those who brought stories of the Dreamlands to Arkham had never ventured this far underground, or perhaps this place can only be found by those who force their way in. Either way, you are now hopelessly alone in a realm you have never heard of, and the only way out is through. 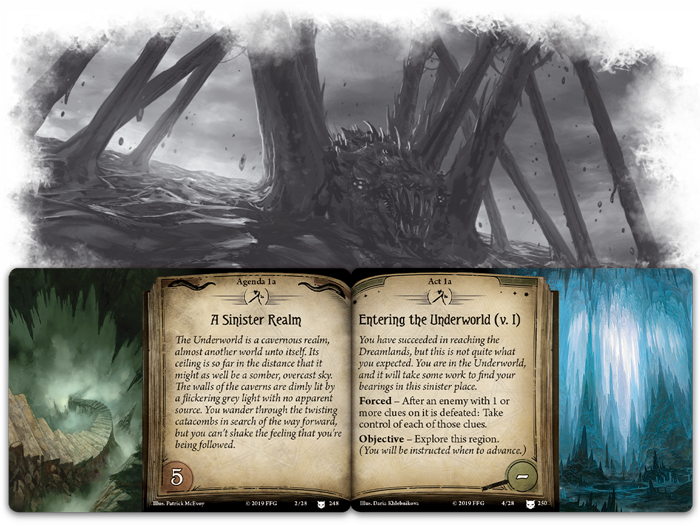 The chilling Underworld is a cavernous realm, almost another world unto itself. Its ceiling is so far in the distance that it might as well be a somber sky. The walls are dimly lit by a flickering grey light with no apparent source and, as you wander through the twisting catacombs in search of the way forward, you can’t shake the feeling that you’re being followed. You had best find your bearings quickly, before something else finds you.

In Point of No Return, the locations of the Underworld have no unrevealed side, and therefore they enter play with their revealed side faceup. What's more, these locations have story cards on their reverse sides. Whenever a location in this scenario enters play, your investigators place clues on that location equal to its clue value, as you would normally do upon entering a location. 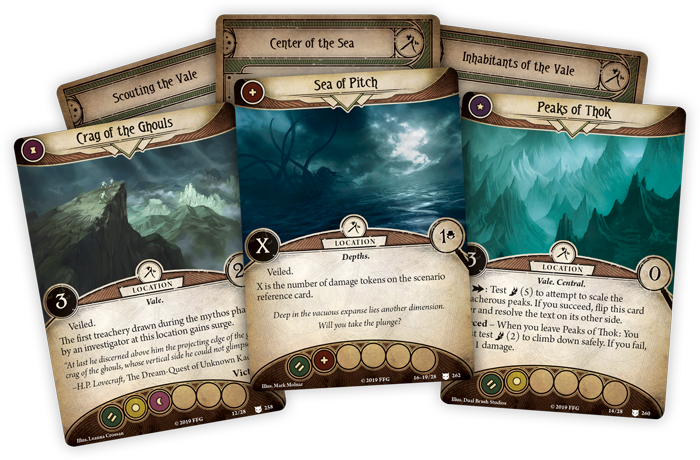 To discover the secrets held on the story side of these locations, you can flip them over in one of two ways. Some can be flipped by using an ability printed on the card, while others need you to fulfill the requirements of the veiled keyword. Veiled locations contain unknown lore or assistance that must be sought out by your investigators before it can be of use to you. As a fast action, an investigator at a veiled location with no clues on it may flip it over, resolving the text on its other side. Once a location has been flipped over and its story text has been read, it cannot be flipped over again for the remainder of the game unless otherwise noted. The secrets you find cannot be unseen—you can only hope that you are prepared for the terrors ahead. 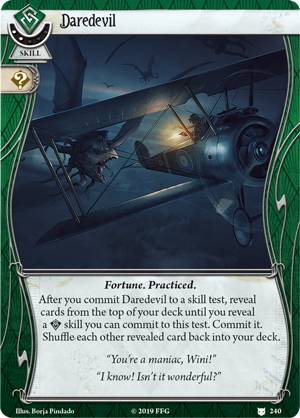 To help you face the trials of the Underworld, Point of No Return offers you a variety of new player cards that you can equip your investigators with before they face the unknown trials of these hidden corners of the Dreamlands. Now that you have finally entered the Dreamlands, you will have to leave everything you have on the table, taking more risks in order to push forward with the help of cards like Daredevil (Point of No Return, 240). This Rogue card introduces an element of searching and certainty to your Rogue decks by allowing you to reveal cards from the top of your deck during a skill test until you reveal a Rogue skill you can commit to the test and then commit it, shuffling each other revealed card back into your deck. You can dive through your deck, not drawing weaknesses, until you find the skill that can give you the boost you need to overcome whatever challenge stands before you. Since going back is no longer an option, this card may prove absolutely priceless.

The Dreamlands may not be what you had hoped to find based on Virgil Gray’s stories, but even in this dark world, you will never be without A Glimmer of Hope (Point of No Return, 245). This Survivor card can only be played from your discard pile, which means that you can keep the precious card spaces in your hand open while still having this event and its wild icon in reserve. Once you use A Glimmer if Hope to help you with a skill test, you add all copies of the card in your discard pile to your hand, including the one you just played, so once you have found this hope, it will almost always be with you. And as it has the myriad keyword, you may include up to three copies of A Glimmer of Hope in your deck instead of the normal two, ensuring that no matter how desperate a situation may seem, there is always a chance that things will turn out all right in the end.

Now that you have forced your way into the Dreamlands, you cannot turn back. Your friends and the other dreamers are still waiting for you somewhere beyond the Underworld and you cannot let the down. Two worlds are relying on you—you must make it out.