In this game, a solo player or up to four cooperative players will be placed in charge of what could be the last city on Earth. The events take place in a post-apocalyptic, Steampunk world that was hit by a severe ice age. The players must effectively manage both the infrastructure of their settlement and its citizens. The core gameplay will be brutal and challenging with morally complex choices - but all in an easy-to-learn, scenario-based formula. In this game the citizens of your settlement won't just be speechless pieces on the board. Society members will issue demands and react accordingly to their current mood, so every decision and action bears consequences!

The players will decide the fate of their people. Will you treat them like another resource? Will you be an inspiring builder, a fearless explorer or a bright scientist? Will your rule bear the sting of tyranny or be remembered as an era of law?

The game is based on a best-selling video game by 11bit studios, the creators of This War Of Mine. The original (digital) edition of Frostpunk is a highly successful strategy-survival-city-builder, a Bafta nominee that first launched in 2018.

Frostpunk: The Board Game is designed by Adam Kwapinski (author of Nemesis, Lords of Hellas and other best-selling games) with a story written by Jakub Wiśniewski (co-author of This War of Mine: The Board Game). 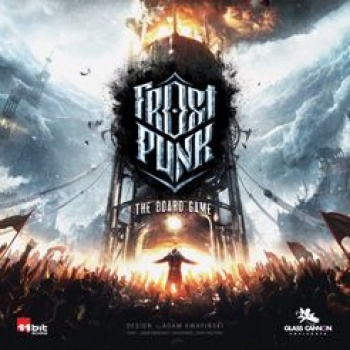